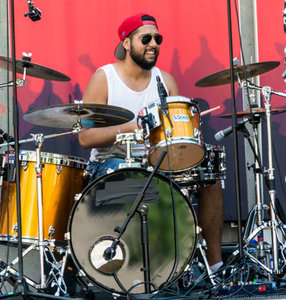 Karan Mattu is a drum instructor, performer, studio musician, music producer and sound engineer. With music running through his entire family, and over 14 plus years of live playing and teaching, his passion thrives through many different styles. He studied at Nimbus School of Recording Arts for Audio Engineering. In addition to this, he studied jazz drumming throughout his high school years. He has won several awards such as Top Junior Drummer in 2010 and Top Senior Drummer for the Envision Jazz Festival. Karan is fluent in a vast range of genres including Rock, Jazz, Funk, Latin, Pop, Bhangra, Hindi, Bollywood, Fusion, Reggae, Country and many more.

He has toured across Canada and the United States, completing his first United States tour during his high school years. Karan is a well renowned musician in the Greater Vancouver area and has played many festivals such as VIBC, Surrey Fusion Festival, DESIfest, Jamin Jubilee, CBC Nooner Festival and many more. He has performed at various venues around the Greater Vancouver Area including The Vogue Theatre, The Imperial Theatre The Bell Performing Arts Center, Surrey Arts Center, Queen Elizabeth Theatre, Studio Records, Media Club, The Hindenburg, The Red Room and the list goes on.

Besides just playing on stage, Karan enjoys teaching musicians young and old how to learn all aspects of the drums. From the age 12, he has been a completely self-taught musician, even picking up the guitar and piano. He teaches from his own studio and is available for mobile lessons. Click here for more information about lessons.

With his family ties deep in the music industry, Karan has had the privilege of sharing the stage with many world class musicians in the Indian music industry. Karan has been associated with the following musicians: