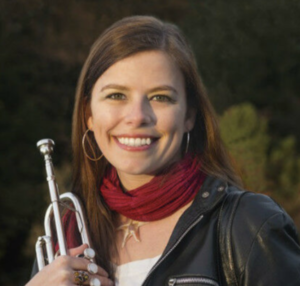 Jazz sweetheart Anita Eccleston is a multifaceted vocalist, instrumentalist, composer and arranger. Born in Kamloops, she was raised in a musical family who encouraged her music when she fell in love with the trumpet and vocal jazz. She pursued it in Montreal, studying at McGill University, and eventually landed in Vancouver, releasing her debut solo album, Jazz EP (2011).

Upon releasing So It Goes (2014), her first album of original songs, she toured eastern Canada, showcasing at Canadian Music Week in Toronto. She has also led her band at the Vancouver International Jazz Festival several times, melding her eclectic songs with her jazz in spectacular style.

Eccleston’s records have been played on radio stations across Canada. Her most recent jazz album, More Trumpet (2016) hit #5 on the Earshot National Jazz Charts. She has also performed for CBC Radio One’s jazz program, Hot Air, and her music has been featured by Italian radio show Donne in Jazz.

Her new single, Long Nights (2021) is a cozy holiday song with a laid-back jazzy vibe, brimming with nostalgia for family Christmases.