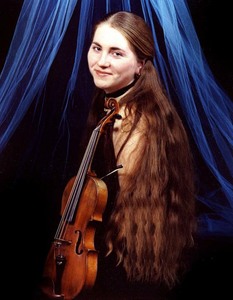 Learn how to play the violin

Albina Molodozhan was born in Moscow, Russia, where she began piano lessons at the age of five. At age six Albina enjoyed violin lessons under the tutelage of Alexander Shirinsky. She continued to study both violin and piano at the music school for children in association with Moscow Tchaikovsky Conservatory. At age ten, she played solo on Moldavian broadcast.

Ms. Molodozhan has performed numerous concerts throughout Russia, Germany, Holland, Switzerland and Canada, with piano Trio-Continuum. As soloist, she has been heard in many prestigious international music halls, including the Moscow International Performance Arts Center, Rahmaninov Hall of the Moscow Conservatory and Laeiszhalle Musikhalle in Hamburg. Albina received an award at the Russian National Festival "Festos" for talented students as best chamber music performer. She recorded a CD in 2004 as a soloist with Gnesin Russian Academy of Music chamber orchestra in Moscow: Bach - Concertos in D Minor for two violins and A Minor for violin.

In 2005, Albina Molodozhan immigrated to Canada where she became a founding member of the Koffler Chamber Orchestra (music director Jacques Israelievitch) as principal second violinist. She taught violin at the Koffler centre of the arts and Fieldstone Day School. Albina has performed with the Gould String Quartet and Sinfonia Toronto (music director Nurhan Arman). In November 2008, Ms Molodozhan toured in the heart land of Germany with Sinfonia Toronto, which earned rave reviews. Albina Molodozhan a core musician with Sinfonia Toronto that was commission and recorded CD featuring John Burge's “Flanders Fields Reflections” won the 2009 JUNO Award for “Classical Composition of the Year”.

Albina's other passion is singing. She began vocal lessons at the age of six and was admitted to children's choir of the Bolshoi Theatre where she sang for ten years. Participating in different operas and having numerous concerts through Russia, Germany, Italy, Japan and Estonia. With the choir, Albina has sung in front of many distinguished people including Pope John Paul II and Mikhail Gorbachev, the former Soviet leader (1990 Nobel Peace Prize winner).

The Bolshoi children's choir made several recordings on Moscow Radio Studio Five and at the Glinka State Museum. Albina continued her vocal training in Moscow under direction of Andrei Andrianov, soloist of ensemble "Moscow barogue" and theatre "Amadei". In 2003 Albina took masterclasses with Donna Ellen, soloist of the Vienna State Opera.